Grapes and golf go hand in hand in Niagara

NIAGARA-ON-THE-LAKE -- Never has the phrase, "So much to do and so little time to do it," seemed more appropriate than during a visit to the Niagara Peninsula. More than 13 million visitors flock to the likes of Niagara Falls, Niagara-on-the-Lake, St. Catharines, Fort Erie and Welland each year.

There literally is something for everyone in the Niagara region. And while the magnificent American and Canadian falls are the biggest tourist draws, the golf and wine industries are growing in popularity.

With more than 40 wineries open year-round and more than 40 courses, Niagara offers visitors with an affinity for both the grape and golf some unique opportunities. The climate that makes Niagara a perfect place to grow grapes, also means golfers can play from April through November.

"In this region, the biggest growth industries are wineries and golf courses," says Bill Thompson, the financial controller for Vineland EstatesWinery in Vineland, located about five miles west of St. Catharines.

The two industries are both after people from the same demographic who share a level of sophistication, adds Peninsula Ridge Estates Winery manager of media and public relations Johanna Burkhard.

So, with that in mind, a getaway weekend to Niagara that combines a little golf and a few wine tours is easy to plan. But which ones to visit? There are some obvious choices for a first foray, but the key is to keep it simple, one course and two wineries a day is manageable.

That's why Rockway Glen Golf Course and Estate Winery in St. Catharines is the perfect place to start. While there are many wineries and golf courses situated in close proximity to one another in Niagara and places like British Columbia, Rockway Glen is the first business of its kind in Canada to bring grapes and golf together under the same roof.

"You can have a wine tasting and then play golf. Visitors can [enjoy] a really nice package," Rockway Glen owner Bruce Strongman said of his operation.

Strongman opened the 18-hole, 6,914-yard par-72 course 14 years ago. Then, he decided to take advantage of the land around the course by cultivating vineyards and produced a first vintage in 2001.

The course is picturesque, incorporating the vineyards and the terrain and vistas of the Niagara escarpment into its design. It's generous to the extreme, featuring wide open fairways that are forgiving for novice players.

A package that includes 18 holes, a cart and a tour of Rockway Glen's wine museum runs $65 during weekdays and $75 on weekends. The museum is quite unique. Strongman bought antiques and period clothing from wineries in France to stock it, including a 19th-Century "pressior" - a machine used to crush grapes. The museum tells the story of how wine is made, from the vineyard to the cellar and everything in between. It's about a 20-minute tour and culminates in a tasting session in their boutique. Admission includes a $2 coupon towards any wine purchase.

If you're hungry, Rockway Glen also has dining facilities, ranging from the casual Grille Room to the terrace or the dining room. All of the dining areas feature picturesque views of the course and the surrounding land.

Or, you can also eat at Peninsula Ridge Estates Winery in Beamsville, a town about 10 miles west of St. Catharines. Peninsula Ridge is one of seven Niagara wineries to combine its products with a fine dining experience. Fare includes first courses such as marinated Prince Edward Island mussels, a goat cheese tart with caramelized onions, clams sautéed with bacon and onions, and fiddlehead and asparagus salad. A sample of main courses includes rainbow trout, confit of duck leg, Black Angus rib eye of beef, mochaccino marinated rack of meadowland elk and wild boar ravioli.

Tours of the winery are free and there are three complimentary wines available for tasting, including the remarkable 2002 Ratafia - a combination of unfermented chardonnay juice that is mixed with fruit spirits, toasted oak, spiced apple, pear and honey.

The tour takes visitors into the barrel room, as well as into an area where juice from the grapes is fermented in giant stainless steel vats. The winery's boutique is located in a restored barn dating back to 1885, while the dominant architectural feature is the jaw-dropping Victorian manor - also built in 1885 - that houses the 65-seat restaurant.

There's more history to enjoy during a trip to the oldest course in Canada. The Niagara-on-the-Lake Golf Club dates back 1875, making it 129 years young this summer.

There are two clubs that have been around longer than Niagara-on-the-Lake's course - Royal Montreal opened in 1873, while Royal Quebec debuted a year later. However, those clubs aren't located on the same ground today as they were then. The Niagara-on-the-Lake course is - and it's easy to see why.

The course is situated at the mouth of where the Niagara River flows into Lake Ontario. A stone's throw across the river sits the American Fort Niagara, which featured prominently in the War of 1812.

Back on the Canadian side, Fort Mississauga sits on the course property. At one time, the brick fort was part of a 150-yard second hole, however, the Canadian government designated it a protected historical site in 1982, putting a stop to what had been a unique par 3 that featured a moat.

While playing, be sure to check out Fort Mississauga, as well as two monuments by the green on the par-3 No. 4. One recognizes the victory of the Battle of Stoney Creek in 1813 over U.S. forces, while the second is placed where the remains of four soliders were unearthed more than 100 years ago.

As far as golf goes, the facility features a 2,993-yard, par-36 nine-hole course. It has open fairways and is forgiving to high handicappers. Lake Ontario touches on all but three of the nine holes.

The course offers either nine or 18 holes of golf and breakfast, lunch or dinner packages ranging from $40 to $90 per person. You can also add a one-hour short game lesson with head professional and general manager Tony Evershed for $25.

As for the wineries, both have unique ties to the golf world.

The magnificent Chateau des Charmes bills itself as Wine Country's 19th hole. When the 2003 Telus Skins Game was held at nearby Royal Niagara Golf Club, the sprawling Niagara-on-the-Lake winery played host to a party for the players, including John Daly and Vijay Singh, says Suzanne Janke, Chateau des Charmes director of marketing tourism.

The winery is owned by the Bosc family, who emigrated to Canada from France in 1963. Today, Chateau des Charmes produces 90,000 cases of wine, including several award-winning vintages. The Bosc's Riesling and Vidal icewines are among some of the best in Canada and the world. It's a must-try, although a one-ounce sample will cost you $7. It's well worth it.

Tours start on the hour, run between 60 and 90 minutes and cost $2. The tour includes a video presentation, as well as visits to the harvest room and underground barrel cellars. It also includes three free tastings, although specialty wines are available to sample for prices ranging from $1 to $7.

And finally, the day ends with a winery - and a meal - fit for a Masters champion. Vineland Estates enjoys the destinction of having had two of its vintages served at the 2004 Masters Champions dinner. The 2001 White Meritage and the 2002 Cabernet-Merlot Reserve were on the menu for 2003 Masters champion Mike Weir's dinner.

Vineland Estates, located in the town of Vineland, about five miles west of St. Catharines, produces about 60,000 cases of wine each year. In 2003, it became the first Canadian winery to win the top award at the Vinitaly International Wine Competition in Verona, Italy.

Some of the winery's premium selections are vintages of Meritage, Cabernet Merlot, Riesling and the ever popular Icewine.

Tours are $6 and run twice a day. They last about one hour and include three tastings.

While the facility - which features historic buildings dating back to 1845 - is impressive, it pales in comparison to the winery's restaurant, which is run by executive chef Mark Picone. If you want to wrap up your weekend getaway in style, be sure to dine here.

The menu changes about eight times during the course of the year and incorporates local ingredients. The food is amazing, matched by the beautiful views of the vineyards. A recent visit revealed a sensational homemade pork terrine appetizer was sensational, followed by a delectable main course of grilled pork tenderloin with blue potatoes and Arden's Boar Bacon. That was followed by a sinfully rich chocolate tart that totally destroyed my Atkins diet that day. But it was well worth it.

And the beauty of this two-day little getaway is that it's likely to whet your appetite for more Niagara excursions. And with so many courses and wineries to choose from there truly is something for everyone in Niagara.

There are three major events held each year to toast the Niagara wineries:

The New Vintage Niagara Festival:
It runs June 12-20 this year and features 25 wineries uncorking barrels of their 2002 and 2003 offerings at the St. Catharines Golf and Country Club.

The Niagara Wine Festival:
It takes place Sept. 17-26 this year and offers more than 100 events during its 10-day run, including tastings, winery tours, wine seminars, family entertainment and a sampling of Niagara cuisine.

The Niagara Icewine Festival:
It runs Jan. 14-23, 2005, and combines tasting of internationally acclaimed icewines along with samples of local cuisine. 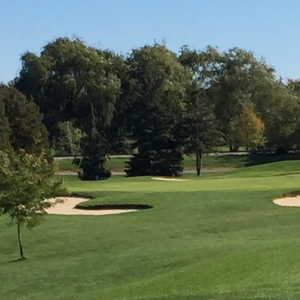 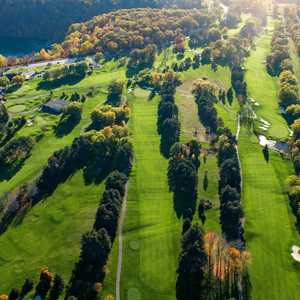 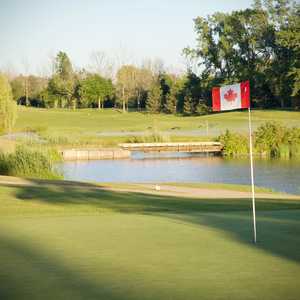