MAPLE, ONTARIO -- A hardy lot, the Scots: eaters of haggis; drinkers of powerful distillates; wearers of kilts; and players of links golf.

While history staunchly identifies Scotland as golf's genesis, it also chronicles the original playing fields as being on relatively inhospitable coastal strips of infertile, transitional "links land" between the beaches and inland agricultural areas.

Courageously and resourcefully, the Scots transformed these agronomic-challenged parcels of treeless, sandy-soiled, reed, weed and dune-populated hills and dales into golf courses, links to be more accurate.

While the term "links" is frequently misapplied in golf realms, it's relevant to modern golf grounds where large waste areas intersect tee blocks and stingy fairways and where gnarly, invasive thigh-high vegetation stands sentry in place of the traditional first cut and rough of parkland-style tracks.

Either way, true links-type golf requires an elevated bravado and a hint of masochism because, simply put, much more stands in your way between tee and green. If you hanker for an authentic links golf experience, give the nod to Eagles Nest Golf Club, a newly opened upscale public course near Maple, Ontario, about a 45-minute non-rush hour drive from Toronto.

Although land locked, Eagles Nest is about as bona fide a links course as you'll get. A heath land links-inspired facility, the owners, a quorum of major construction magnates comprising York Major Holdings Inc., wanted to be true to links heritage from the get go, starting with seriously adverse real estate.

It began in the mid-1990s with the acquisition of a decommissioned sand and gravel pit next to a capped landfill. Canadian golf course architect Doug Carrick, who favors rugged, links golf facilities, won the design bid. Construction began in 2001.

The resultant transformation of 210 previously inert acres is dramatic. From the major intersecting thoroughfares, Dufferin Street and Major Mackenzie Drive, you're hard pressed to know what's beyond the treed buffers and raised knolls.

Once inside the gates, past the 36,000 square foot stone façade and cedar shingled clubhouse, reminiscent of an English country manor, it's sensory overload. Lush emerald fairways wind and undulate between starkly contrasting gray waste areas and wheat-hued fescue growing unattended on the perimeter of each hole. The earth tone mosaic takes some getting used to especially when you expect an expanse of wide green fairways to fire upon.

"The course has drawn similarities to the old links in Scotland and Ireland and particularly Ballybunion," says Euan Dougal, Eagles Nest's director of golf operations, a transplanted Scotsman whose lyrical dialect adds flavor to the highland manner of the place. "Visitors from Scotland are quite moved. They're amazed that we could create a links type course that plays hard and fast like the ones they have. In those terms it's mission accomplished."

A daunting 7,476 yards with a141 Slope and 76.1 Rating from the back tees, Eagles Nest will test your mettle and metals beginning with the first hole, a boomerang-shaped 565-yard par-5 that requires a tee shot with 249 yards of carry to clear a pair of fairway bunkers. Each hole is quaintly named in Gaelic. Number one, guid fettle, or good spirits, could, subject to your drive, be a misnomer.

The elevation variations become evident on the 3rd hole, a450-yard downhill par-4 to a serpentine fairway dotted with seven bunkers. "That's the wow factor," says Dougal, formerly head professional at Bigwin Island, another Carrick design. "There are terrific sight lines and it's a fair test of golf."

The 7th hole, the highest point of the man-made topography is a 435-yard par-4 dogleg with a tee shot over a pond onto a fairway defended by no less than 14 sod wall bunkers.

With panoramic vistas of downtown Toronto, particularly from number 8, a diabolic 164-yard downhill par-3 to an inverted bowl green, each hole has a distinct character. The common thread through this beautiful tapestry, however, is cramped landing areas.

Tighter than a matador's pants with more sway than Will and Grace, the fairways, confirms Dougal, "are evil." With nary a level shot anywhere, the Nest characteristically punishes errant placement. "When you miss here it's off you go," he says with a baneful grin.

The quality of challenge at Eagles Nest is best captured on the appropriately named Long, the 642-yard par-5 penultimate hole. A split fairway past a desert-like waste bunker, water and fescue rough invites a tee shot either right, a minimum of 300 yards, or left, considerably shorter but with a longer route home.

The 18th hole is a 484-yard stunner, visually and strategically. A straight long drive gets you somewhere close to the bend of a dogleg edging a major pond on the right that hugs the fairway all the way to the narrow green. The approach is intimidating. Mercifully, the feint of heart have a bail out area before the green.

The layout is imaginative and thoughtful. You'll certainly use your entire arsenal of weapons of grass destruction. The amenities are first rate. Lago, the main restaurant, serves up elegant ambiance and classic cuisine while Jim & Garry's offers more casual pub fare.

There's also a heliport near the 9th green where high rollers can shuttle in and out from Toronto's Pearson International Airport, nearby Buttonville Municipal airport or Toronto island Airport. Usage of the chopper pad requires 24 hours prior notice says Dougal.

The owners encouraged innovation and conservation suggests Brent Rogers, the Nest's director of turf operations. "For links authenticity we met with Scottish course operators and our sod bunkers contain high end Hutchasson sand from Muskoka," he says. "Ours is the first club in Canada to use velvet bent grass on the greens and tees. The fairways are colonial, velvet and fescue. Depending on the cut, we can ratchet the speed up or down. Velvet looks and plays like links."

To maintain environmental integrity the club embarked on a $300,000 wetland enhancement. "We're proud of that," notes Rogers. "Before it was an inert area. We changed the profile, reduced erosion and now recharge the ground water. We have a private well and are part of the cooperative Audubon sanctuary program."

The neighboring land fill is a small mountain, a green background that deflects wind currents, adding blustery gusts for even more on course challenges. By default the fill produces a constant skyscraper of white steam plumes, akin to a surreal Highland mist. It's from naturally produced methane that drives an electricity generating steam turbine.

"Eagles Nest is the type of course where you have to first play it to learn it," says Dougal. "After you've adjusted traditional strategy you can put some good numbers on your card."

The club's tag line is "pure golf". Perhaps "humbling" should be shoehorned in there as well.

Getting there. Along the toll routed 407 it's 20 minutes from Pearson International Airport. Take Dufferin Street north and turn left immediately past Major Mackenzie. From Toronto head north on the Don Valley Parkway and motor west on Major Mackenzie to Dufferin. More information is available by calling 905-417-2300 or www.eaglesnestgolf.com on the Internet

Conditions: Eagles Nest is new and shiny. Opened in May 2004, the purveyors have pumped some $30 million into course design, construction, architecture and savvy personnel. Attention to physical detail is exceptional from the yardage markers and the stone bridges to dining amenities, from the paved and curbed cart paths to manicured fairways. The greens are a true test, slick and fast. The practice range, with seven target greens and a large putting surface, is convenient and functional. Service: Too early to tell. At this writing there were more hard hats and power tools than waiters and pro shop staff. Value: At $175 a round, cart and rage balls included, it's not for the budget minded. But splurge and play. It's that memorable. Design: Simply put, it's gorgeous. A design and manufacture marvel, it's unlike anything you've played in Ontario. There's no rescue from the fescue. Bottom-line, bring lots of balls.

Chris Traber has divided his career between journalism and corporate communications. Graduating with a journalism degree from Ryerson University in Toronto, he was a feature and sportswriter for The Toronto Sun and United Press International covering major league baseball, basketball and hockey. His freelance work has appeared in ranging international publications including The Globe & Mail, New York Times, Success and Global Reinsurance. 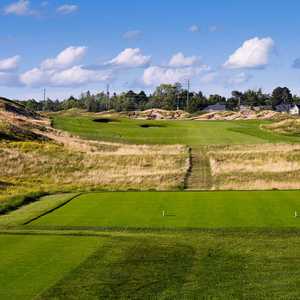 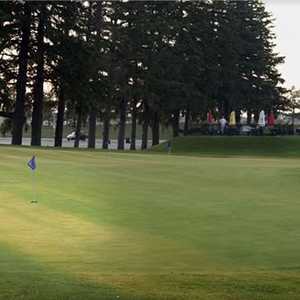